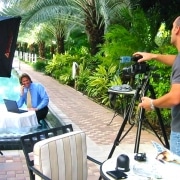 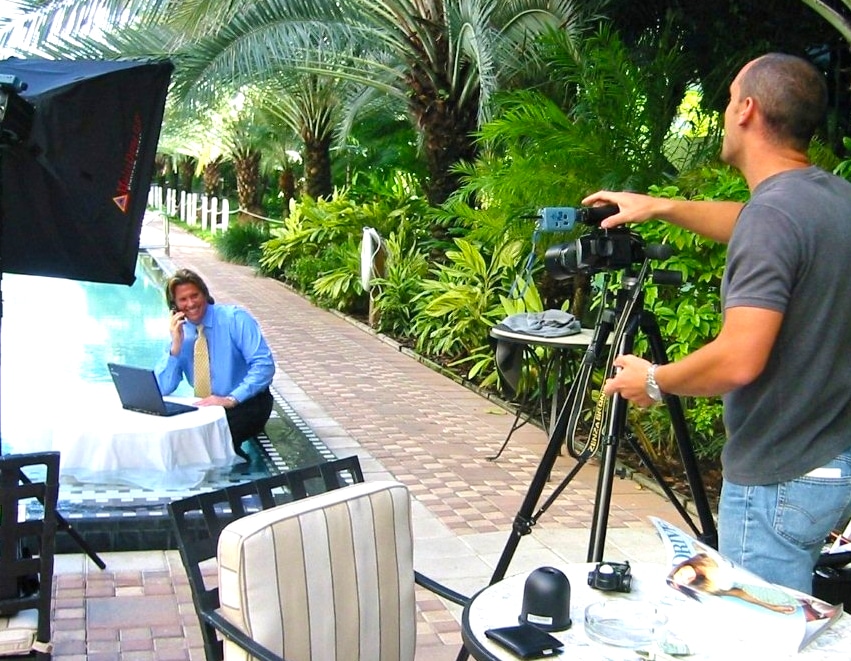 With the internet age, technology and smart phones you can set up your office anywhere you need it to be for the day. So if you are working in beautiful South Beach Miami Florida that perfect office location may be a super trendy pool at one of South Beaches hippest hotels. That is just were we are today hanging out with Jeff for a VIP South Beach Magazine photo shoot and interview at the beautiful National Hotel. Jeff’s company VIP South Beach is South Beach Miami’s premier insiders guide and concierge service. If you have ever been to South Beach you know its one place were the nightlife never stays the same and keeping up with what’s hot is a full time job. So lets get started and ask Jeff some questions.

Q: You have been in the VIP service business for 18 years what did you do before VIP South Beach and why did you decide to start a VIP service?

A: When I moved to South Beach I was going out 4 to 5 nights a week enjoying the amazing South Beach nightlife, I also had a partnership with some friends in a restaurant/bar called the Chili Pepper in South Beach. We later expanded next door and opened Brant’s Break and a few years later we opend a Chili Pepper in Atlanta. The hot South Beach lounges and nightclubs were really hard to get into and you had to be a beautiful model, celebrity or have great connections and through my bars and many nights out I had great connections. My friends and acquaintances were coming to Miami all the time and I would alway have to go with them so they could get in the door. Thats when I first had the idea for VIP South Beach and a few years later I started the company.

Q: When you first started VIP South Beach were the Miami Beach venues receptive to your idea and willing to work with you?

A: The good thing was that I knew most all of the owners of the hot restaurants, lounges and nightclubs so I was able to get meeting with them. They were all very receptive about the idea and willing to work with me. I remmember one of the first meeting I had was with Tim Hogle the owner of Tantra Restaurant & lounge and David Grutman was the manager. I had met Tim before and it was the first time meeting David, they were both very supportive and interested. David was a go-getter and had great ideas on how we could work together and both benefit. He also incorporated Tims yacht for private dinner parties catered by Tantra which was a big seller. I know I sent more clients to Tantra that any other restaurant. David Grutman went on to become the king of South Beach and owns the hottest nightclubs in Miami Liv nightclub and Story nightclub along with many other A list venues.

Q. What VIP Services do you offer?

A: All our itinerary’s are customized to our clients tastes and needs many clients want the full nightlife itinerary which includes bar, restaurant guidance, limo reservations, pool party reservations and nightclub VIP table bottle service reservations. Others may only want the nightclub bottle service reservations. So its all up to the client and what VIP services they prefer.  Our most popular is our premier South Beach nightclub party packages which include a 2 hour open bar at a lounge in South Beach, one way limo transfer from the lounge to the nightclub and hosted no wait club entry with the cover charge included in the package price. We have all the best nightclubs including Liv Wednesdays, Liv and Story nightclub Thursdays through Saturdays, Cameo nightlub Saturdays.

Q: Why is it better to reserve nightclub VIP table/bottle service through your company?

A: We work with all the best South Beach clubs on a weekly basis and have a personal relationship with all of them. I guarantee the best pricing on the nightclub bottle service minimum spends and I will make sure you are in all the hottest South Beach nightclub parties. We will also always stay within the budget you have for your group.

Q: What separates your company from the all the others?

A: Well first of all we were the first VIP Services company to open in South Beach in 2000 so we have the most experience and I guarantee the best service. When we create our clients nightlife itinerary’s we make sure it is totally suited to there specific tastes. There are plenty of nightlife options and we make sure we reserve the most exclusive celebrity filled nightlife parties in South Beach.

Q: Do you ever get tired of South Beach?

A: No way! South Beach is a great place for the nightlife the weather and the people are great and so diverse from Latin America to Europe, LA, NY and Russia. There is never a dull moment in this town.

Q: What was the idea behind the VIP South Beach Model Of The Month feature in the magazine?

A: When people think of South Beach they think of nightlife and beautiful models after all the fashion industry along with Miami Vice started the whole South Beach renaissance in the late 80s. So as a way of paying tribute to the spark that ignited this amazing destination into one of the nightlife capitals of the world I started the VIP South Beach Magazine Model Of The Month feature. Its been a very popular feature in our magazine and we are always looking for new models to feature.

Q: Who is the lucky photographer that you hired to do all the photo shoots of the VIP South Beach Model Of The Month winners.

A: Well we wanted to find the best photographer in Miami Beach and got really lucky and found JBow Photography. He does a great job and shoots amazing pictures of all our Model Of The Month winners.

Q: When are you planning to release the print edition of VIP South Beach Magazine.

A: We are scheduled to release the print edition of VIP South Beach Magazine very soon. I am very happy to say we have had a huge demand from advertisers and we are really excited for the release of the magazine.